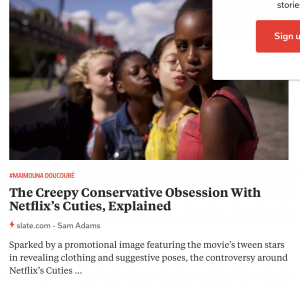 Slate.com’s recent headline called “conservatives” “creepy” for “obsessing” about the movie “Cuties”, which portrays underage girls in sexually suggestive and explicit situations. I have not seen it, but the consensus seems to be “It’s worse than you think.”1

Slate employs a tactic here that you will see again, called “gaslighting”. In this case, “cultural gaslighting”. Gaslighting is where someone manipulatively tries to convince you that you are losing your grip on reality.

This headline is almost a definition of gaslighting.2 To the person who feels and expresses revulsion at this movie, Slate

Again, you will see cultural gaslighting more and more. How to deal with it?4

That would be an interesting conversation. Springboards to the gospel may then abound.

2 Which, tellingly, has since been changed online.

3 The satire site The Babylon Bee’s response to this misdirection was characteristically spot-on: https://babylonbee.com/news/new-netflix-movie-actually-murders-puppies-to-teach-that-murdering-puppies-is-bad

4 Aside from never reading slate.com.

Get a Weekly Digest of Articles